The science of Fairness creams 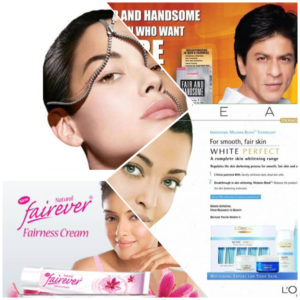 Over the past few years there’s been quite a sudden uproar over selling of fairness creams. I don’t know if the objection was triggered by the fact that a separate range of products will now be available exclusively for men , or we have finally given up on “fair and lovely” kinds, or we just want to voice an opinion that can grab attention because “its different”, or maybe anything more bizarre than the imaginable. For at least three generations we tried and tried, with almost no success, so now we decided that the problem is with our outlook – from  stereotypical representation of women, historical inclination towards everything “firangi”, manipulations by social icons who endorse them, to social evils like dowry system have been slated to be the reason for the flourishing of a diabolical idea – the fair skin. Why this sudden uproar??

Epiphany?? Intolerance?? A new fad?? Which is it??

Whichever, but the fact remains that we are slamming the whole idea. However, my problem is that every such uproar triggers a train of thoughts leading backwards to why it has existed for so many years in the first place. I am personally interested in exploring the psychological reasons for its inception rather than implications of its existence. Why did human mind at all  decide to do a certain thing? What was the urge? So I searched the Internet resources, read few articles – some written by subject experts and others by enthusiastic non-experts. Everyone has a genuine point to make. But, 90% literature quotes examples, incidents, problems, issues related to the aftermath of the diabolical practice and belief in “Fair is Better”. At first fairness cream and its endorsers seem to be the culprits, then the focus shifts to age old affinity towards fair skin owing to prolonged subjugation during British rule because fair represented power and control. Although this cannot be true at least not in toto because the obsession is definitely older than the East India Company.

Further delving into literature reveals similar obsessions among African Americans too. Au contraire, white women (especially) have a great longing for tanned skin. While it may be the grass-is-greener-on-other-side syndrome or genuine need for consumption of natural Vitamin D which is abundant in India but scarce in the cold countries, some have argued that climatic and environmental conditions are responsible for the skin color hence less sun means less color. And so on goes a list of arguments and counter arguments.

Interestingly, the great black hair obsession of black women caught my attention. Suddenly I was reminded of a time when hair oils were the only hair products in the market and the premise used for endorsements was the promise of “black, long and thick” hair. There were few hair tonics and shampoos in Indian markets during 70s and 80s. Conditioners were unheard of. Forget the rest of the list that now extends to haircolors, hairserums, anti-dandruff creams, styling gels, setting sprays etc. Since ages women in India have had an indubitable inclination towards black hair , there is enough proof in historical and religious literature. Grandmother’s remedies always included hair treatments that claimed to make your hair strong, thick, long and black.

So the question I was intensely grappling with was – what connects Forever fairness cream  to Kesh Kanti hair oil besides frequent blarings on TV channels and commercial values at stake. It has to be some scientific fact, way of thinking or human response to a certain stimulus. Several readings later I did find an answer to my query.

A certain  article by German researchers Hans-Peter Frey; Christian Honey; Peter König (http://jov.arvojournals.org/article.aspx?articleid=2193355) reported that human eye fixations are  same for face recognition in both color and grayscale manifestations. It implies that visual attention is color independent. However Color contrast plays an important role in attracting attention to certain parts of the face which remains constant across subjects. When examined in the light of Hering’s Color Opponency Theory (http://psych.ucalgary.ca/PACE/VA-Lab/colourperceptionweb/theories.htm), it makes sense to a layman’s mind. Naturally we are programmed to get attracted to color contrasts and  pay attention to a person’s face much longer and with more focus, if the contrast is high. In a human face the most prominent outline is hairline, hence higher the contrast between the skin color and hair color, more likely it is to attract and retain attention of the perceiver. Darker hair and fairer skin are desirable because they satisfy the psychological need to be noticed and acknowledged.

Now if we re-examine the obsessions of women across the globe regarding facial features, whether it is fair skin for an Indian woman or dark hair for her African counterpart, it all seems to be engrained in our neurobiology. We are guided by our natural instincts to like one thing and dislike the other. When we look at a face, the duration of our gaze is controlled by the identifiability of areas in the face in desirable proportions and this forms the basis of first impressions. Typically Indians have brown skin, brown eyes and brown hair – variations limited to intensity of the color, otherwise from top to bottom all colors belong to the same family -Orange. A slightly fairer skin would definitely increase contrast value, add interest to the face and balance the look. This also explains the Indian craze for bright colors in their outfits. It is all about breaking the monotony of monochrome. Africans on the other hand wish for  hair in the darkest hue of black probably for the same reason i.e. creating contrast value for greater attention.

This further strengthens the theory of visual communication that we Image Consultants employ in our daily work. Aspiring for  fair skin or black hair cannot be viewed in bad light, however effectiveness of these products (Fairness creams and hairoils) making huge profits since ages by feeding on the gullibles is still questionable.  As for Image Consultants we have several other techniques in our kitty that we are already using to create impactful visual communication. With stronger conviction about the the scientific reason for what I enjoy doing, I am on my way to work on another interesting client, and leave the rest of the world to gather wisdom at their own pace. Good luck with the creams and hairoils!!